It’s been a very long journey of letting go. I’m still on this journey, and I know I will be for a long time. I tend to have trouble pushing people out of my head, as well as what they say. I have been bullied, romantically dumped, slandered against publicly online, and left to be alone during lunches because my friends decided I wasn’t cool enough.

I remember my dad told me how forgiveness is the best gift you can give yourself. I thought he was just trying to get me to be a good Christian with the whole forgiveness thing. He kept telling me it’s a heart issue, and that the peace is really more for myself than anyone.

I’ve learned for myself how liberating and unburdening forgiveness is. And if I’m going to be honest here, it’s never about the other person. For me, it’s understanding on some level of why they acted the way they did and letting it go. It’s choosing to release the pain that certain people may have caused you while being loving toward yourself and realizing you don’t deserve to be hurt.

Personally, it took me a long time to realize my self worth. I felt like I deserved the pain that others inflicted on me, even to the point where I inflicted bodily harm on myself. The pain was overwhelming; I never thought anyone would choose to love me. My flaws and mess ups with people haunted me for lengthy periods of time, and even began to stack up on top of each other. I would look up how they were doing on social media, just to see if they missed me. Usually they looked happy, and I struggled to let them continue on that happy journey without meddling in it because they were done with me.

This is where the forgiveness comes in. As well as the freedom that comes with it. I heavily believe in that old saying, “forgive but never forget”. I am a very forgiving person, and even if you hurt me really badly I’ll eventually come to that place. But I’ll never forget the pain and hurt that it caused me. In that way, I can be petty. However, thinking about it more, it’s not really about being petty. I think it’s about taking care of yourself. I have learned a valuable lesson from each person that has effectively dumped me (and sometimes trampled too) and used that lesson in a way that furthers the next relationship.

I think it’s one of the bravest things; to never give up on people. There are many out there who hurt, but there are even more that want to see me thrive and succeed. And that means the world to me more than anyone else who doesn’t want me in their lives anymore.

The picture I included is a forgiveness stone. I painted this rock, to help me remember the day I forgave one of the people who really hurt me deeply. I still have it sitting on my dresser, to remind me. 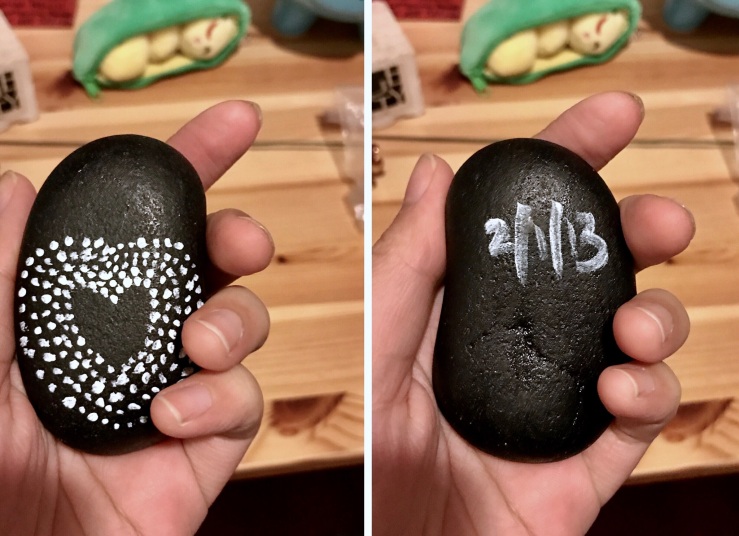 View all posts by Lydia