On the eve of the new year, I had an idea. I was going to write letters to people, people who have hurt me or that I’ve had to process a lot about. And I would never send these letters. Ever. My therapist has suggested doing this multiple times; not necessarily for all these people, but every now and then for a person I’ve struggled letting go. I never gave it genuine thought until now.

Funnily enough, this current post comes about a year after publishing memory lane doesn’t mess me up like it used to. Actually, when I wrote that post I was still in the middle of my manic episode. I set it to publish with a couple others I had written, all spaced a week apart. So I can’t be sure about when I wrote it. But it seems that this theme of moving on and sorting feelings out has spiked around the new year for at least the past couple of years.

I’ve always been a bit skeptical about the new year. People making resolutions when, in reality, you don’t need a new year to change yourself. I saw it as a cop out for not making changes in the present. But as the years have gone by, I’ve come to appreciate the fresh start that it represents. Even if in the grand scheme of things it’s just another day, it’s more symbolic of a new beginning. It feels more real because the calendar gets to start over, because it can be new slate if you let it.

Of course, everything about life from 2017 (and before) is following me into 2018. I have no disillusions about that. However, I allowed myself to feel hopeful and reflective about the past as well as my wishes and dreams for the future.

With this, I wrote these Letters I’ll Never Send. They were to people in my past who caused me significant pain. I wrote it as if I was talking directly to them, which I suppose is how a letter should be anyway. They took longer to write than I expected. It took me anywhere from 30-45 minutes to finish one letter, and then I had to give myself some time to recover in between. I was likely pushing myself by doing this all in half a day, but even so, it felt good to do.

What surprised me was how difficult some of the letters were to write compared to others. I thought one person would be harder to write to, when actually it was someone else. I thought one specific event would be more painful, but actually it wasn’t that. It was something else I forgot about entirely and only came out as I was writing. It helped me realize what I still need to work on, which is invaluable. While these letters were far from fun to write, I found it cathartic.

I was reminded about how easy it is to carry around baggage. To have these heavy memories and hurts lugged around with you, weighing you down. Sometimes I forget how tiring it can be. Every now and then I find myself looking for emails, messages, comments that damaged me so badly in the past. I’m not even sure why; perhaps it’s to remind myself that I was wronged and that it was justified to feel so hurt by it all. Perhaps I’m mildly masochistic. Either way, I’m going to do my best to put that behind.

In each of my letters, I wrote that I forgive them. Whether they felt that they needed it or not, or whether they wanted it or not. It took me a very long time to get to that point. However, when I wrote it, I know I meant it.

Time really does help, if not heal.

Since I’m not on social media, I decided to do little personal updates at the end of my posts. To be honest, it’s mostly because I’m really excited about this…

1. I sewed my first quilt!! I made the entire thing, from sewing all the pieces together to make the top, to quilting all three layers together (the top, the batting, and the back), and binding. I actually bought this kit when we first moved to NorCal in the hopes that one day I would quilt. And finally, four years later, that day has come. I’m so proud of myself. 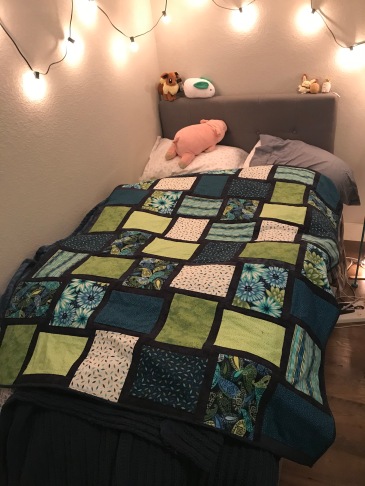 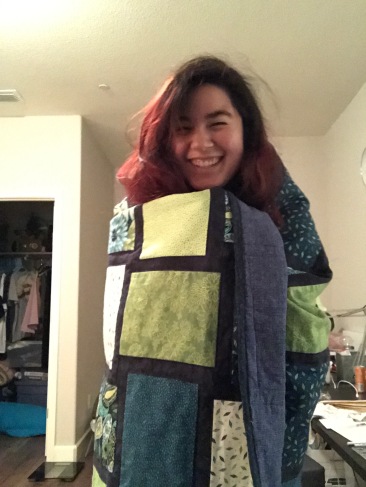 Excuse the poor lighting–I finished it at night and I was so excited I took the good pictures then.

2. I finally got to see Coco, thankfully it was still in theaters, and I got to see it with my family. It was a beautiful film, and both myself and my sister were sobbing by the end of it. Highly recommend.

3. My wisdom teeth were extracted a couple days ago, and I was put under while all four of them were taken out. I’ve been in a lot of physical pain and my cheeks are extremely swollen. I’m already getting tired of my soft food/no chewing if you can help it diet. Let’s hope my cheeks go down by the time classes start on Wednesday..

And that’s about it!

View all posts by Lydia